Maids will be striving to achieve a first for them this season on Saturday- 3 consecutive wins. After their primary win on ‘grass’ this campaign, away to Berks rivals Bracknell, a return to Fortress Braywick, sees the final game of the first half of the season against Weston Super Mare.

The visitors this week, come into the match as the form side of the division, currently on a 4 match win streak, looking to end Maids’ fine home run. As appears to be the way with many teams in this division, Weston have a former Premiership professional in their ranks, centre Glenn Dickson, formerly of Otago and Northampton Saints is player-coach and an extremely accomplished kicker, James McKay, at 10 is a familiar face, having played when Maids last featured at this level. Upfront promises to be a particularly intriguing encounter, with both teams having enjoyed dominance at scrum time, and Weston will look to captain Sam Coles, and fellow prop Ollie Streeter to stop the Maidenhead juggernaut, which has proved to be such a weapon already.

Maids left it late to overcome hosts Bracknell last week, scoring with the last play to secure a BP win, and break Bracknell hearts. In truth, the margin should have been greater- 2 intercept tries for the home team, several missed kicks at goal, and a failure to have scrum infringements suitably penalised, all contributed to a scoreline which was far closer than it should have been, but credit must go to the home team, for their brutal defence, which repelled much of what came at them.

Jose Bolton has rolled the dice again this week, making a few changes to the squad, and one man who has earnt himself a starting spot, after impressing off the bench, is Alex French, who we asked a few questions of, to learn a little more about the strange Northern ginger centre.

*Which Maids teammate would you least like to be stuck on a desert island with, and why? Ed Keohane- as much as I like the guy, I don’t understand a word he says.

* Which Maids teammate would you most like to be stuck on a desert island with, and why? Coley- I feel the odour of cats and dogs would deter other predators and keep us safe.

*What’s your favourite TV Programme? Really into Police Interceptors- good to see my mates from back home.

*What hobbies do you have outside of rugby? Suckling and milking my Mrs’ huge udders, and watching videos of puppies which Pig Dick tags me in.

*If you could be any animal, what would you be and why? I’d be a meerkat, so I could ride Pumba Jones round the clubhouse.

*What would you like to achieve this season, both personally, and as a team? Personally, establish myself as a first team regular. As a team, finish top 6, and keep the home record.

Mark Childerhouse has been given the week off by Russell Bolton, so he can go and buy an engagement ring, before proposing to Amy over Xmas, whilst William Cadden has somehow managed to cling onto his new fit Mrs, but is on borrowed time until he is dumped again, no doubt. Ryan Long has promised to leave Smokey Joes before the 5am close this Friday night/Saturday morning, and Myke Parrott has been restricted to just the 3 Xmas sandwiches for breakfast. Perry Jansen switches to scrum half this week, and will look gorgeous after a Saturday AM fake tan session with Will Greenwood, and George Blewitt has promised the Maids fans he’ll be performing his new try celebration routine, featuring a picture of his labra-poodle on his under armour, should he cross the whitewash.

Come on you Maids!!! 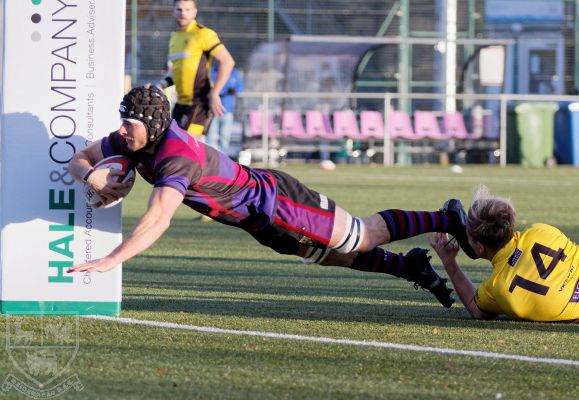 Following a superb bonus point, 52-30 victory over 3rd-placed Bournemouth last week, Maids head into their 2nd derby of the season full of confidence, looking to break into the top 3 and claim the Berkshire bragging rights, in what is the first league fixture at 1st XV level between them and Bracknell for 10 years.

No doubt, the standout name in the Bracknell line-up is former London Irish and Tonga number 8, Chris Hala’Ufia. Famed for his uncompromising style of play and big hits, he’ll be looking to get his team on the front foot, and provide quick ball for young fly half Vic Hardwicke. At full back, Cam Macdonald, a loan signing from Chinnor, is one to watch, whilst skipper James Ingle is likely to partner Hala’Ufia in the back row, along with youngster Tom Scott. For the Lily Hill Park men, defeat a week ago to bottom side, Hornets, 42-17 means they currently occupy a place in the bottom half of the South West Premier table, something they will be determined to rectify by beating their Berkshire neighbours tomorrow.

Standing in their way, is arguably the biggest Maids pack in recent memory, and one of the form players in that pack, is ex-Maids Colt, Will Cadden, who we caught up with this week in an attempt to get an insight into his very confused, badly-wired brain…

*Position(s)- Head in hands, weeping after being dumped. Flanker.

*Which Maids teammate would you least like to be stuck on a desert island with, and why? Lewis ‘Pumba’ Jones- his poorly calf muscle would require too much attention.

* Which Maids teammate would you most like to be stuck on a desert island with, and why? Perry Jansen, because I know he hates being stuck alone with me for more than 10 minutes. It would kill him.

*What’s your favourite TV Programme? I like Peppa Pig and Art Attack.

*What hobbies do you have outside of rugby? I enjoy being in a clique with Churchy and Chills, and neglecting the other boys. I’ve also rather enjoyed baiting my psycho ex-girlfriend over the last 6 months.

*If you could be any animal, what would you be and why? Easy. I’d be a pre-historic moose, so I could roam the forests and bellow all day every day.

*What would you like to achieve this season, both personally, and as a team? As a team, beat Dings and Newton Abbott at home, on a personal level, learn my 3 times table, not get dumped by current, fit girlfriend (again), and not get stabbed by the ex-girlfriend.

George Blewitt returns to the squad, after a couple of weeks out, taking his labra-poodle to Crufts, while Sam Angell has lost enough weight to squeeze into the number 12 shirt, so is allowed to start. Another returnee, is Sam Churchyard, staunch Britain First supporter, delighted with recent social media activity from Donald Trump- he starts in the row, next to left-wing, socialist hippy Karol Poborsky aka Sammy Hallett, which makes for fascinating political debate during breaks in play.

Christoph Bart, although injured, has been promoted into a leadership position with the Maids Ultras, and takes his place on the terraces alongside lifelong hooligan Ted Keohane, hoping for a Maidenhead victory off the pitch. Will Macaulay continues his spell on the sidelines, and will attempt to watch the game in relative peace, away from Jockstrap John and a pissed-up Prinny, while Dom Birch is likely to be present, cheering on Bracknell, following a rough week of job application rejection emails from Stonor Marketing.