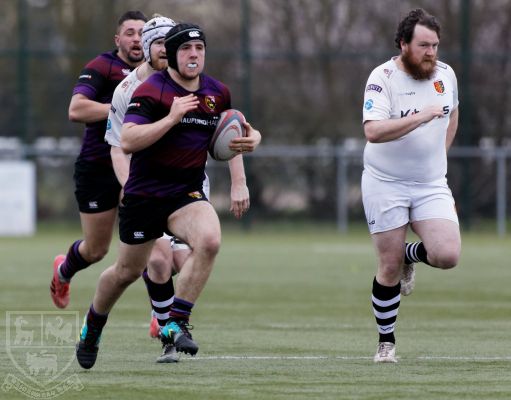 Following a superb victory over fellow play-off contestants, Barnstaple 2 weeks ago, Maids were unlucky to return from Bournemouth last Saturday a week ago pointless, which put Barum back in the driving seat for that coveted extra game on April 27th. With the game finely poised at just 15-10 to the League Champions, with Maids on top, a harsh yellow card swung the game in Bournemouth’s favour, which eventually saw them close it out, to win 29-10, a harsh score line for a game that was extremely close for the majority of the 80 minutes.

The games don’t get any easier for Maids, who this week welcome old adversaries Bracknell, who enter this Berkshire derby off the back of 4 consecutive victories, including a highly impressive 27-14 win away at Exmouth, complimented by a 26-9 victory against 4th placed Ivybridge a week ago.

There are various changes to the Bracknell line up from the return fixture before Xmas- ex-Windsor player Chris Laidler lines up in midfield, alongside Cam Macdonald, and his brother Mikey, a recent new acquisition to the club, having played at Chinnor last year, will start at scrum half. Lorenzo Palacio is another new addition, and he’ll don the 7 shirt, to be joined in the back row by Sam Gibbons, and skipper Michael Clarke, who has been relegated from the front row to line up at number 8.

As is often the case after a tough fixture, Maids have had to reshuffle their squad following a couple of injuries- Dylan Baptista has failed to recover from his hamstring strain, and he joins Mark Darlington, Myke Parrott, Sam Hallett, George Blewitt, Tom King and Jaryd Robinson, amongst others on the injured list. We are however, delighted to welcome back Niall Crosley, who comes in to hopefully raise the average IQ a little, which has been heavily weighted down with the recent introduction of James Johnstone and Elio Mandozzi from the sandpit crew. Sandpit CEO, Leroy Meek has luckily come to Maids’ rescue this week, and has managed to prise young Elio away from the Bournemouth beach, to take his place in the front row. Along with the significant help of his carer, he took time away from watching aeroplanes, to answering a few questions for us…

Occupation- My parents pay Nike to make me think I have a job with them. I mainly run around the store pretending to be an aeroplane.

If you could be any of your teammates, who would you be and why? Max Roddick, because if I was as sexy as him, it would be well easy to get girls, despite my otherwise long list of limiting attributes.

Which teammate would you least like to have over for dinner? Definitely Lubbs. He wouldn’t get lashed and would then spend his time telling me about his boxing exploits with kids half his size.

What hobbies do you have outside of rugby? I love going to Cheeky Charlie’s with my best friend Myles.

Tell us something we don’t know about you- I was in a Match of the Day magazine when I was younger, advertising Chelsea-themed baby bibs.

What are your aspirations for this season? 2 more BP wins, lose my V-plates, get a playoff spot.

Ryan Long, shortly after declaring his undying love for the club 2 weeks ago, takes another holiday, so misses the game, and he is replaced in the squad by Sam Churchyard, who is the first person in Maidenhead history to be placed on pub watch for administering ‘Guiness wet willies’ to unsuspecting patrons of the local town bars. Laurence Leonard, saved by the Brexit delay, gets another couple of weeks in a Maids shirt, and he starts at 6, joined in the back row by stand-in skipper, Will Macaulay, and Dave Cole, who aims to hit his first ruck of the season this weekend.

Elsewhere, members of the notorious “Slags’ Supper” Whatsapp group, will be dripping like an egg sandwich at the prospect of Charlie Broughton strutting his stuff on the hallowed Braywick turf, he lines up in midfield alongside Niall Crosley, replacing Ed Keohane, who at the time of writing, is roughly 8 hours deep into the doghouse, as he travels to Australia for a couple of weeks with his wife, opting to miss the most important few weeks in the club’s recent history, all for a karaoke competition.

A huge congratulations to young Scott Prince, who wins his 50th cap. A product of the much-vaunted Maids youth system, it is a remarkable achievement to have amassed 50 1st XV league appearances, at such a young age, even with an ASBO, an addiction to glue-sniffing and his dysfunctional Father. Congratulations Scott, here’s to many more.

There will be a minute’s silence this week, as we pay respect to man who probably shed more blood, and has definitely been the cause of more opposition blood, than any other man to ever have played for the club. Rene Dance was a cornerstone of the Maidenhead pack for over a decade, and alongside brother Jody, and loose head Allan Greene formed a daunting front row, feared and respected by sides all over the South West. Many hard, tough men have donned the black and magenta in years past, but none were as tough as Rene Dance.

Ren simply refused to take a backwards step, and if it kicked off, as it did all the more frequently back when he was playing, then there was no other man you’d want on your side. A Maidenhead hero, whose name is remembered and revered amongst opposition, teammates and supporters was as warm and loving off the pitch, as he was fearless on the pitch. The term ‘legend’ is used all too frequently in the modern age, but that’s exactly what Rene is, a true legend, who will never ever be forgotten at Maidenhead RFC.

Our deepest sympathies go to Rene’s family and friends, and we thank you for giving us this special man. Sleep well legend, we will miss you X

Rest in peace Rene, thank you for everything