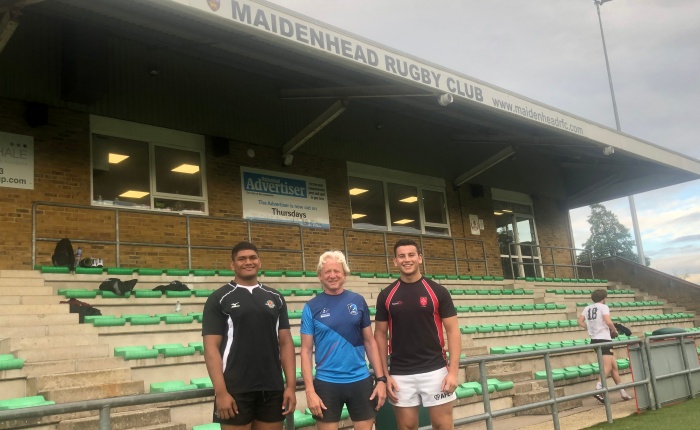 As the season opener draws ever closer, we are thrilled to be able to announce details of our new partnership with Championship high-flyers, Ealing Trailfinders.

Ealing are embarking on an exciting journey to build a World-class academy system, alongside Brunel University, to provide fantastic academic, sporting and life opportunities for young people. Through Academy Manager, Ty Sterry, and Head of Rugby at the Ealing/Brunel University Programme, Gareth Rise, Maidenhead were identified as a club that could help with the development of some of the young scholars from this programme, and we are absolutely delighted that 5 of the lads will be playing at Maidenhead for this coming season.

Making their debuts in Maids colours in the preseason friendly this evening against Barnes, are Charlie Dearman and Sione Funaki, with details of the 3 further additions coming in the next couple of weeks.

Charlie Dearman is a fly half/centre who was with Saracens, up until under 18 level. He has experience playing with Lambs Rugby, and went to school at New Hall School in Chelmsford, Essex. With a touch of Owen Farrell about him, Charlie is a physically-robust young man, with great comms and organisation skills. He will be working particularly closely with Will Greenwood, who had this to say “I’ve been so impressed with Charlie in training already, and from what I’ve seen, I’m convinced he has all the attributes to cut it at the very top level. I am excited about playing a part in this young man’s development, and hopeful I can lend some valuable advice, when required.”

Sione Funaki is a number 8, with some rather famous family members… ‘Tio’ as he is known to us all, is a 138kg wrecking ball, and is able to name Mako and Billy Vunipola as his cousins. Though quiet and shy off the pitch, Tio is not somebody you want rampaging down your channel- the young man can certainly shift!

Tio has previously been part of the Exeter Chiefs Academy and was schooled at Shebbear College, before joining up with Ealing this summer. Head Coach, David Mobbs-Smith had this to say about the young man; “Tio is an awesome physical specimen, and will be a huge weapon for us. In current number 8, Dave Cole, we have a fantastic, skilful mentor ready-made for Tio to learn off. I can’t wait to see him in action!” 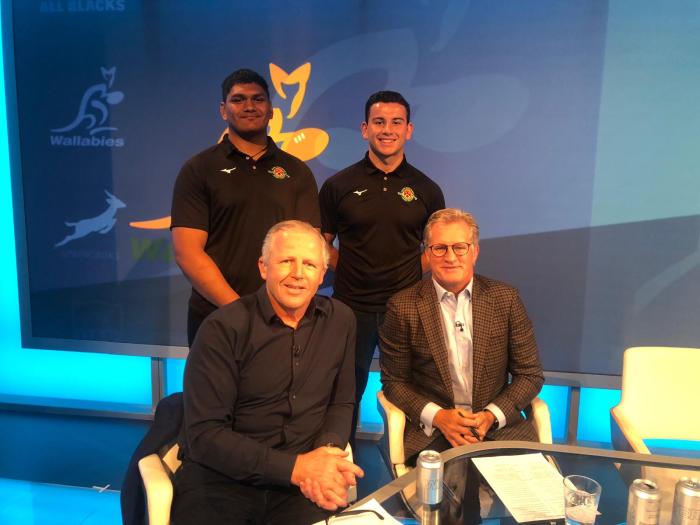 Tio and Charlie with Sean Fitzpatrick and Michael Lynagh, before Australia v NZ 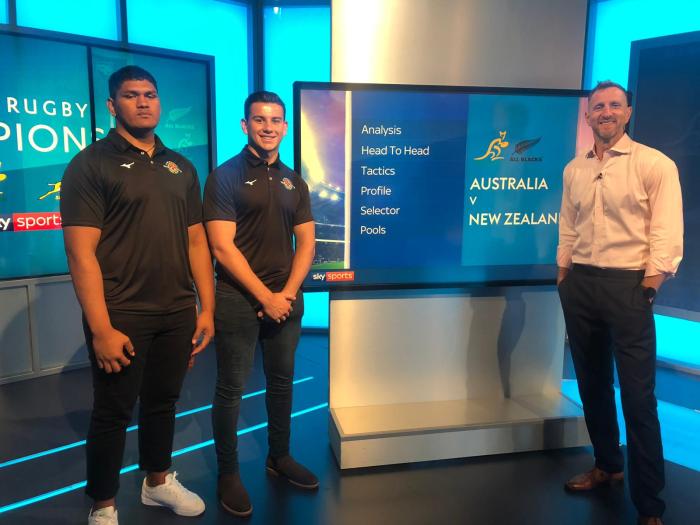 Pictured here with Will Greenwood, as he took them for work experience at Sky

“Our new Club Partnership with Ealing Trailfinders RFC is very exciting on many levels for both Maidenhead RFC and Ealing.  The opportunity for young Ealing academy players to experience senior rugby at a high level within an environment and organisation as well run as Maidenhead can only benefit the Ealing lads and they have already settled down well within our preseason training schedule; we look forward to seeing them run out in Magenta in our preseason games and showing us what they can do.

It also creates a strong link for Maidenhead with a Championship level club both with regards to sharing coaching ideas and experiences and also and offering the potential of an additional opportunity for our younger players to have access to a pathway to senior rugby.”

Charlie and Tio make their debuts for Maids tonight against Barnes, at Chiswick RFC, 8pm kick off. 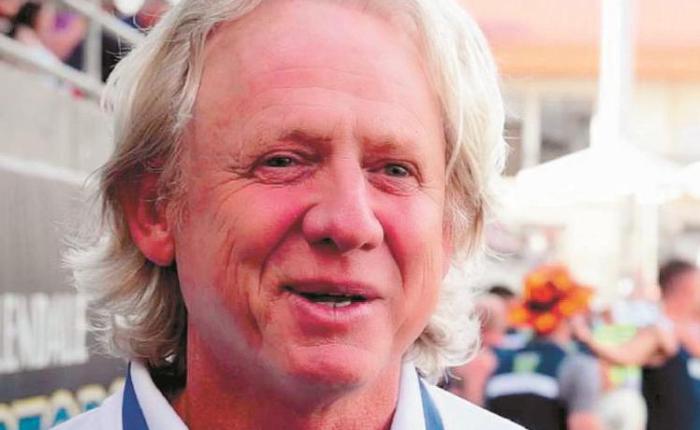 Hello all, and welcome to the first edition of ‘Mobbsy’s Musings’, my blog on all things Maidenhead RFC.

Firstly, I must start by saying how lucky I feel to be working at this tremendous club. When I first interviewed for the role earlier this year, the words ‘environment’ and ‘culture’ were consistently talked about, as the vital foundations underpinning all that happens at Braywick, and the experiences I have had so far, in such a short space of time, certainly echo those sentiments. A big thank you to all of my fellow coaches, the players and all the support staff at the club who have made me feel so welcome!

As we near the end of the preseason schedule, I was hoping to reflect on our first competitive performance, following a fixture with Beaconsfield, scheduled for last night. Sadly, due to injury and unavailability, they were unable to fulfil the fixture, so we now look ahead to Barnes away, next Friday night. Playing away from home at a side that finished in the top half of National 2 last year will be a great test for the players, and a good barometer moving forward. We conclude our preseason schedule with a home game against CS Rugby from London Premier, on August 31st at Braywick- I hope to see you all there.

I have been thoroughly impressed with the attitude and aptitude of the players so far this preseason- starting in the first week of June was a somewhat daunting prospect for many, but they’ve worked really hard, and I’m confident we will reap the benefits, when we kick off at Drybrook on September 7th. Our new additions to the playing squad have been well documented, but one new addition not mentioned so far, who has made a huge contribution, is new Strength and Conditioning Coach, Murray Barratt. Stepping up from player to coach, can sometimes be a tricky dynamic to overcome, but such is the quality of content that Murray is delivering, I know the lads are delighted to have him in place, and I know they are chuffed with looking that little bit trimmer in their holiday pictures!

Alongside the focus of fitness in preseason, we have spent much of our time looking at how we attack with more structure, and I’m delighted with how our shape is coming along. We’ve got some great playmakers in our side- Will Runciman, Ed Keohane, new signing, Ben Mitchell and also young Duncan Jones have really impressed with their quick adoption of this shape, and I’m confident they can interchange pretty seamlessly now, which is a huge asset to have.

A big attraction of coming to Maidenhead, was the focus on youth at the club, so I’ve been really pleased with the input from our Colts team at training. Under the new look coaching team of Mike Andrew and Allan Greene, I know they are in safe hands, and will continue the excellent work of Gareth Andrews-Jones, who has stepped aside, after many successful years at the helm. I have enjoyed seeing up close, some of our recently graduated Colts- Elio Mandozzi, James Johnstone, Owen Langstone, Drew Prince and Phil Wells amongst others, and I know they will be the core of this club for years to come. Top boys, with bright futures.

So, what can you expect to see from the team next season?

We are going to play fast, attacking rugby, and I believe we will have the fittest team in the league. Zoran Higgins will continue to improve our set piece and breakdown work, whilst Will Greenwood has a hugely talented backline at his disposal, and I know he’s going to have them firing on all cylinders come the season opener. I’m hugely excited for the potential of this group of players, and I cannot wait to get going.

Finally, a huge congratulations to Joe Keohane and Michael Dykes, who are in the England under 18 squad touring South Africa. Leave nothing behind boys, have no regrets, and most importantly, enjoy every second.